To see a local article about my petition to save the Gowanus Bernie headquarters, click here.

Meanwhile, somewhere in Montreal, French-Canadians are learning about yours truly and the Brooklyn scene. 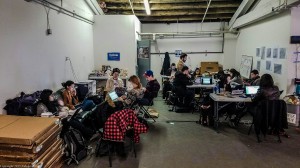 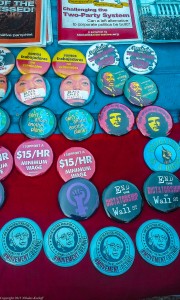 After an energetic and dynamic summer, the Bernie Sanders campaign seems to have stalled.  With the Benghazi hearings behind her and the e-mail scandal receding, at least for the time being, Hillary Clinton has regained political momentum and much of the pundit class has returned to its usual establishment mantra stressing the supposed “inevitability” of the former Secretary of State’s electoral prospects.  What is more, recent developments on the international stage, including real fears over terrorism and ISIS, have obscured the Sanders campaign within the media spotlight.

Indeed, the media has paid more attention to the wild antics of Republican presidential contenders who have made outrageous statements about Syrian refugees, for example.  Even as the media amps up its coverage of the GOP field, it has curtailed attention of the Democratic candidates.  With the media class beating the drums for increased war once again, it’s unlikely that Sanders will be able to get his message across, and if anything pundits are far more likely to toast Clinton when it comes to being “tough on defense.”

Recent polling data underscore the depth of Sanders’ current dilemma.  Over the past six weeks, Clinton has increased her lead over Bernie in both national polls and in early voting states.  The former Secretary of State now leads Sanders by a whopping 20 points at the national level, and some pollsters believe that recent attacks in Paris will help Clinton, who is viewed as having strong national security credentials.

What accounts for such dramatic reversal of fortune?  To be sure, the American public often lacks the ability to think for itself, and if pundits say that Hillary is a more plausible candidate then the polls may follow suit.  On the other hand, it’s difficult to imagine how the Sanders team could have pursued a more obtuse or misguided media strategy over the past few months.  Rather than capitalize on early summer momentum, during which time Sanders held a series of mass rallies, the upper echelons of the campaign seem to have concluded that it is now time to cultivate a more cautious approach designed to appease the mainstream.

Frittering away much of the campaign’s early energy, Sanders’ media handlers have produced slick ads which emphasize irrelevant information, such as the fact that Bernie is a grandfather.  Despite such packaging, Sanders himself seems to eschew small talk and tends to shift attention away from personal details during media interviews.  Intuitively, Sanders seems to realize that the packaging distracts attention from his core message stressing a veritable “political revolution.”

Just what this Sanders rhetoric really means is open to some question, though such utterances have surely galvanized many followers.  Bernie suggests he would break with the traditional mould of presidential politics, though he’s been far too coy when it comes to providing specifics.  Rather tantalizingly, he has stated that Obama’s chief mistake was to have demobilized his followers after the 2008 election.  In a nod to socialist union organizer Eugene Debs, Sanders’ historic role model, the Vermont Senator declares that he won’t make such tactical mistakes in the event that he gets elected.

Such declarations, in tandem with Sanders rhetoric stressing the need for a grassroots movement, suggest that this veteran legislator may seek to transcend the narrow and limited contours of a traditional presidential campaign.  Speaking with Rolling Stone, Bernie remarked “I am not running to fulfill some long-held ambition.”  On another occasion, he told students at the University of Chicago “change never takes place from the top down.  It always takes place from the bottom up.”  In line with such talk, Sanders has hired a firm called Revolution Messaging to oversee his political digital strategy.

If more people turned out to vote, Sanders says, the Democrats could win the presidency and potentially take back Congress from the Republican majority.  Once ensconced in the Oval Office, Bernie would seek to get the public engaged when it comes to crucial votes.  “What the president can do,” Bernie declares, “is to say to the American people, ‘OK, if you think that it is important that public colleges and universities are tuition-free, and that that program be paid for based on a tax on Wall Street speculation, well, on March 15th there is going to be a vote in the House, and let’s see if we can bring large numbers of people here to Washington to say hello to members of Congress.’”

Such talk has won Sanders some plaudits on the left end of the spectrum.  “Even a somewhat cynical 71 year old socialist like me could be thrilled to see Bernie Sanders talking about the need for an American political revolution on MSNBC,” says Sandy Boyer of Socialist Worker no less.  “To be honest, I’m not sure that I ever expected to see a leading presidential candidate say we need a revolution on prime time TV.”

Despite the fiery rhetoric, some of Sanders’ personnel choices seem perplexing and lead to questions about the candidate’s judgment.  Take, for example, Tad Devine, one of Sanders’ longtime advisers.  Judging from his career, Devine is no radical.  To the contrary, he has advised such political mediocrities as Michael Dukakis during the latter’s failed 1988 campaign.  Four years later, Devine moved on to Nebraska Senator Bob Kerrey, another establishment politician who failed to win his own respective presidential bid.  In 2000, Devine backed yet more inside the beltway politicians when he advised Al Gore and Joe Lieberman.  Four years later, Devine was at it again advising yet another Kerry who similarly went down in flames.

Bernie’s reliance on Devine is even more perplexing in light of the latter’s track record on Latin America.  In 2002, Devine took his expertise to Bolivia where he advised Gonzalo Sánchez de Losada — otherwise known as “Goni” — on the latter’s presidential campaign.  Working with his colleagues at the Washington, D.C. firm Greenberg-Carville-Shrum, Devine advised Goni on how to overcome his image problem.  As I write in my book, Revolution! South America and the Rise of the New Left, Goni had a lot of political baggage left over from his previous stint as president in the mid-1990s.  At the time, Goni had done his utmost to privatize Bolivia’s energy sector while opening up the nation’s resources to the likes of British Petroleum and Enron no less.

Devine plays a key role in the 2005 documentary, Our Brand Is Crisis, which takes the viewer behind the scenes of the Bolivian presidential campaign.  At one point in the film, Devine is caught brainstorming on how to change his client’s poor standing with the electorate amidst a climate of economic malaise. “The frame, for us, is crisis,” Devine remarks.  “That’s our brand. We must own crisis and we must brand crisis — who can deal with it, who has the capacity to deal with it.”

Despite the enmity many Bolivians felt toward Goni, Devine and his team orchestrate a come from behind win for their candidate and manage to defeat indigenous coca farmer Evo Morales.  As I wrote in a previous article, however, victory proved to be short-lived.  Angry over Goni’s gas policy, protesters took to the streets to spark an outright rebellion which forced the new president to flee to the U.S.

The revolt proved costly, with a hundred people dying in clashes.  In the wake of the fiasco, the Boston Globe remarked “Globalism extends to the American way of campaigning, it seems, and the hubris of the gringo strategists — earnest ex-Clintonistas employed by James Carville’s Greenberg Carville Shrum group — would be hilarious if human lives and a country’s political will weren’t at stake.”

It would be one thing if Devine were apologetic about his role in Bolivia’s misfortunes.  But reportedly, he is adamantly proud of his work and sees Goni as “an honest leader” and “a guy who wanted to do the right thing.”  Though Devine concedes that Goni caved in to the demands of the International Monetary Fund, nevertheless the former president was an economic leader and made unpopular decisions on behalf of Bolivia.

It’s a little unfair to question Sanders on his record based on the actions of a sole adviser.  Yet, Bernie’s tapping of Devine seems to go against the grain of the Vermont Senator’s own instincts on Latin America.  In fact, as Mayor of Burlington, Sanders attracted national attention for taking anti-imperialist stands like supporting the socialist Sandinista government in Nicaragua.  In 1985, Bernie met with President Daniel Ortega and became the highest-ranking U.S. official to visit Nicaragua.  In his own book, Sanders praised Ortega and called his trip to Nicaragua a “profoundly emotional” experience.  Moreover, Burlington even became a sister city to the Nicaraguan capital of Managua.

Whither the Political Revolution?

So what should Bernie do to reverse his lackluster poll numbers?  While there is no silver bullet when it comes to mounting successful political campaigns, demonstrating commitment to grassroots social change might be one way to shift the media narrative in Sanders’ favor.  So far, Bernie has hinted rather obliquely that he might call for protests on meaningful votes once he is elected.  Such an approach, however, smacks of inside baseball.

There’s another option on the table, albeit a rather untested one: Bernie could call for mass protest during the actual presidential campaign.   To be sure candidates eschew such tactics, though Sanders has a huge e-mail list of followers which he might call upon.  Boyer seems to anticipate such an unorthodox approach, noting that “Bernie could be there any time an innocent African-American is murdered by the cops. He could speak at climate change demonstrations from coast to coast. He could walk the picket line with minimum wage workers demanding $15 an hour. These kinds of actions would accomplish much more than getting out the vote for Democratic politicians.”

There’s no guarantee that such a strategy would be successful or even rouse the media from its endless mantra of national security and terrorism.  Furthermore, adopting radical tactics would probably fly in the face of Devine and Bernie’s more cautious advisers.  As the countdown begins to Iowa and New Hampshire, however, Sanders may not have much to lose.